Cultivation of Shiitake on Synthetic logs 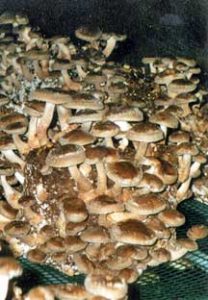 Sources of Spawn in North America

Selection of the tree species for sawdust cultivation should proceed with caution. Fresh sawdust without aging by fermentation can be used for production of shiitake only if it is from high quality tree species, such as those graded 4, excellent by FAO (Oei 1996). Oak, chinkapin, hornbean, sweetgum, poplar, alder, ironwood, beech, birch. It is always preferrable not to ferment but age the sawdust for 3-4 weeks. Periodically turn the pile to air and cool the pile.

Many other formulations are available in articles on the internet.

Water should be mixed into the substrate to about 48-50 percent, and not 60% as suggested several years ago. Water should not appear at the bottom of the bag at anytime.

Bags are filled either by one of the following methods :

Sterilization depends on bag size and, nature and amount of the substrate. For 2-3 kg. Sawdust-based substrate in polypropylene bags, sterilize in autoclave for 2-4 hours at 121°C.(use as a reference only). Initially during trials, it is always necessary to tract the temperature in various parts of the autoclave as well as in the bagged substrate by insertion of a thermocouple inside the substrate. After the substrate reach 121°C, it is necessary to maintain at 121°C for 30 minutes.

When cooling, allow HEPA filtered air to replace vapor in the autoclave.

In general, through spawning (spawn thoroughly mixed with the entire substrate) in larger bags is used in US. In this case, fill the bag with sawdust to a level below the filter. Through spawning gives a much faster growth rate. Heat-sealed bags (with microporous breathing filters), usually UNICORN Type 14 ( 8 x 5 inch foot print x 19 inch high) insert required amount of spawn, and seal the top with impulse sealer. Bags partly filled with the substrates, allow the manipulation of mixing the spawn with the substrate by shaking mechanically or manually

After thoroughly mixing the spawned bag, it is placed in a incubation room at about 23°C. 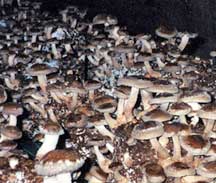 Check the characteristics of your shiitake strain, especially fruiting temperature and adjust accordingly. The following is adopted primarily from Stamets (1993) for strain China-Stamets-2, a strain with a broad range of tmeperature for fruiting. This strain can be fruited at either cold temperature* or warm temperature**. See Table 2 for detail in growth parameter management for spawn fun, induction of primordia and fruiting development.

Observation Of How The Shiitake Mushroom Grows

All shiitake strains show optimal mycelial growth (spawn run) at 25°C. The duration of spawn run is usually 1-4 months, depending on strains and methodology. Some light in the day/night cycle towards the end of the spawn run is conducive to the induction of primordia. However, it could be difficult to judge the timing for lighting during spawn run. Different approaches can be used, such as short exposure to light, e.g. 4 hr./day-night cycle (Royse 1997), or use a low level of light, e.g. 50-100 lux (Stamets 1993). When shiitake substrate is fully colonized by the white mycelia, it does not mean that the block is ready for fruiting. A mycelial maturation stage is required. There are 5 stages of mycelial growth (Oei 1996, Wu 1993):

The desirable stage for markets: when the edge of the mushroom cap is still in-rolled downward (60-70% cap opening).

Harvest And Preparation For Second And Subsequent Flushes

Be aware that some fast-growing strains (e.g. China-Stamets-2) may produce unexpected pre-mature fruiting before mycelial maturation (not desirable). Care should be taken to move the blocks as little as possible during spawn run as moving (physical shock) may trigger pre-mature fruiting in such strains. Lower the humidity to 60% R. H. for 6-12 hr. before harvesting. 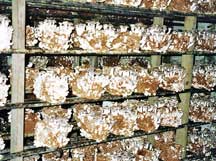 In contrast to growers in southeast asia, heat-sealed larger bags with microfilter breathing windows are used in general by growers in North America for shiitake cultivation. These bags, each filled with 2-3 kg, or more (sometimes 6 kg) substrate, produce more flushes of mushrooms. In methodology, through spawning, browning outside of the bag, and water soaking for fruiting induction are commonly adopted here. Mushrooms are produced under indoor controlled growth parameters.See 3. Management of growth parameters as an example by Fungi Perfecti. There is a tendency for North American growers to use faster growing strains.Shiitake mushrooms produced by growers here are sold as a fresh produce.

Growers must be aware that experience helps in shiitake cultivation, a process of science and art. The intention of reviewing each stage of shiitake synthetic log cultivation and studying model systems, is to give growers some insights and inspiration to adopt the best possible methodology for their individual needs in growing a very worthy mushroom.