A Brief Introduction to Spring Agaric 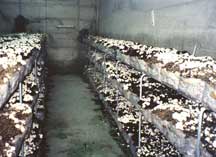 The fresh mushroom in high temperature seasons provides light and tasty high-grade vegetables for people. And it gives mushroom farmers considerable economic benefits. But three things should be well done for high output of spring agaric (Agaricus bitorquis), Chinese called Dafeigu. They are choosing improved breeds, fermenting, and preventing plant diseases and insect pests. The introduction of the main technical points of the three links is as follows:

3. Employ both prevention and cure, control plant diseases and elimination of pests
The air temperature of cultivation in spring and summer changes from low to high. The extent of the harm of plant diseases and insect pests is from light to heavy. In the middle ten days of March, as the indoor temperature raises to above 15°C. Various injurious insects begin to germinate. Pesticide is not suitable to be used because this time is the period of spawn running. Precautionary measures should be well done to provide against possible troubles. The main injurious insects to spring agaric are mosquitoes, springtails and mites. These insects, their type of build is infinitely small, concealed property is strong, breeding rate is high, breeding cycle is very short and generation amount is very big. Frequently they begin breeding in compost in the period of spawn running and burst out in the period of fruiting.

In the respect of plant diseases, the main is Truffer (Dichliomyces microspora). It fights for nutrient with mushroom. It can lead mushroom to be without off spring. In view of the characteristics of the plant diseases and insect pests, prevention and cure is an important measure for the mushroom cultivation. In view of the plant diseases and insect pests in the period of spawn running, the most effective measure is mixing the compost with pesticide. The pesticide “xiaguning” is a special purpose pesticide for preventing pests. It is safe, low toxicity and long effectiveness. Before spawning, sprinkle the pesticide “xiaguning” which concentration is 1000-2000 multiples in compost. For not adding to the water in compost, the pesticide can be enriched 100 multiples. That is adding 50-100g pesticide into 10 Kg water. Sprinkle it in 100Kg compost. Sprinkling , turning, filling and spawning at the same time. The compost that has mixed with pesticide can keep no pests in the period of spawn running. After casing soil, add 1000 multiples “xiaguning” and “guchongjing” into cropping water and fruiting water to control the insects in the period of fruiting. When the temperature goes up to above 20°C, the adults of mosquitoes and springtails move from weeds to fruit body to lay eggs. As finding the adults of mosquitoes move on the mushroom beds, sprinkle the pesticide “guchongjing” and “luqingjuzhi” on the beds, walls and ground.

The spores of Truffer is from soil, so the casing soil mush be disinfected. Take the clean soil in the middle sheet of paddy field, beat into pieces and dry it in the sun. Five days before casing, sprinkle 500 multiples “duogufeng” on the soil, then cover the soil pile tightly, five days later it can be used for casing. During the period of fruiting, pay attention to the hyphas on the surface of soil. If some irregular lumps appear on the surface of soil, and the fruit bodies all around are reduced, rake the soil and examine the compost. If the compost has changed color and has peculiar smell, it may be Truffer. The soil and compost that has been infected must be cleared away without delay. Sprinkle heavily 300 multiples “duogufeng” and 100 multiples “gujunqing” on sickly place. Dry it naturally, a week later, fill soil and sprinkle water to stimulate fruiting.