A Brief Introduction to Troopin Cordyceps 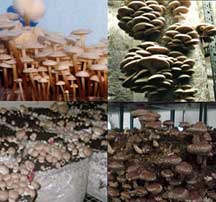 Troopin cordyceps (Cordyceps militaries ) is also called north Chinese caterpillar fungus, north awe to in China. It belongs to Corcyceps, Clavicipitales, Pyrenomycetes, Ascomycotina, Troopin cordyceps and awe to that is widely known in China are both Corcyceps, because it’s a typical breed in Cordyceps, its widely received by the scholars all over the world. The artificial cultivation of Troopin cordyceps has achieved success and a series of produces has been opened up. This will open a new route for nourishing food and functional food. In pace with development of science and technology, the cultivation and processing of Troopin cordyceps would have brilliant prospects.

As cultivating Troopin cordyceps, firstly inoculating spawn in medium to form a large number of conidiums. Secondly, choosing conidiums to make suspended spore liquid by aseptic water, then inoculate it at host, which means pupa. Protect the pupa until it become stiff. Then put the stiff pupa in simulated natural environment like wild Troopin cordyceps in it and culture it. The seed stand that grows from pupa will be exactly alike as from wild pupa.

The detailed method of operation follows:

Troopin cordyceps cultured in fore mentioned way, it needs 35-45 days from inoculation to mature period of the fruit body. It will harvest 50g-350g per square meter. According to examination, Cordyceps militaris artificial cultured has a great deal of awe to acid, awe to element, amino acid, trace element and alkaloid, etc. It can enrich the marrow, resist cancer, calm and diminish inflammation, stop blooding and reduce phlegm. It has a good curative effect to nephritis, hepatitis, asthma and neurasthenia.