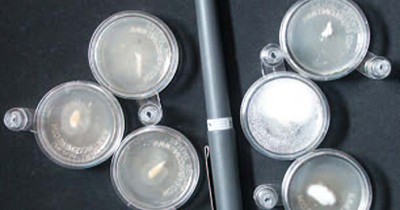 This review was written by by Mark Spear on August 14, 2003.  I offer it here for your consideration.

Lou Hsu developed an unconventional Petri dish and sent me a few to evaluate. This product appears to be aimed at field use due to the following characteristics:

I began by making PDYA plus antibiotics. As the plates had to be sterilized I decided to fill them first then autoclave them. Their tight lids and small size raised concern that filling them with sterile medium after autoclaving would cause too much contamination. After some experimentation I found a way to fill the plates efficiently. Prepare the media on a heated stir plate. Once the ingredients are completely dissolved use a Pasteur pipette to squirt about 3.5 ml into each open plate. The plates can be difficult to handle so laying them out on a pan will facilitate things.

After filling, put on the covers. Press down gently to allow the air to escape from the pinholes. Autoclave filled plates at 121 °C for 15-20 minutes then use the slow exhaust cycle of the autoclave. If time permits allow the pan of plates to solidify in place. If this is not practical they carefully remove the pan to a cooling area with HEPA filtered air. Be careful to keep the pan level to keep the liquid medium from getting on the Petri plate cover. After cooling I kept the plates in a zip top bag on the shelf until needed. Lou recommended covering the pinhole with tape. This would probably be a good idea If the plates had to be kept exposed to the air where they could become contaminated or dry out. Also, as these are re-usable plates, it is best not to write on them directly with a marker. The tape sealing the pinhole could serve as a label area. After three weeks of storage as described, none of the plates were contaminated or dried out.

On August 9th, a mushroomer (Jack Cook of the Western Pennsylvania Mushroom Club) called with news of a prime fruiting of Laetiporus sulfurous. This is one of the best gourmet species but it has never (to My knowledge) been successfully cultivated and brn fruit in “captivity”. I packed a small bag for the safari as follows.

Total weight of the bag, tools and supplies were less than 2 pounds. The isolation procedure used is illustrated below  (click  a photo to enlarge): 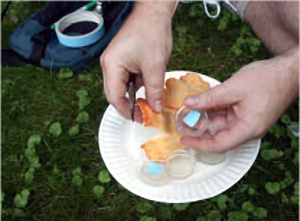 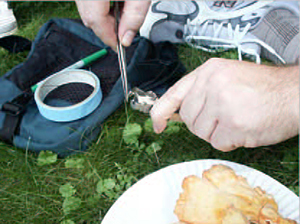 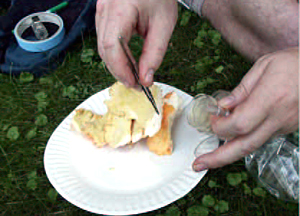 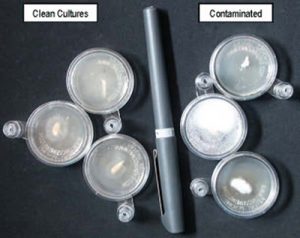 Upon return to the lab the 6 plates were simply left in their bag at room temperature for incubation. After six days 3 of the 6 plates had uncontaminated, usable cultures to work with.

Where mold colonies did develop they appear to originate from the mushroom tissue explants, not from the air.

Considering that the initial isolation performed in a grassy area beside a road and not in a laboratory under HEPA air, these results are very satisfactory.

At Lou’s request, novel plates were tested in the lab and field. I found them easy to work with and effective for capturing mushroom cultures from the wild.

The tiny plates would not be my first choice in the lab for selecting and maintaining fungal cultures. Similarly and they are not as easy to use as Rodac plates for collecting mold samples and performing hygiene checks.

However, for field work collecting mushroom cultures, these are the best products I have seen to date. Hobbists, field scientists, and bio-prospectors will want these plates.